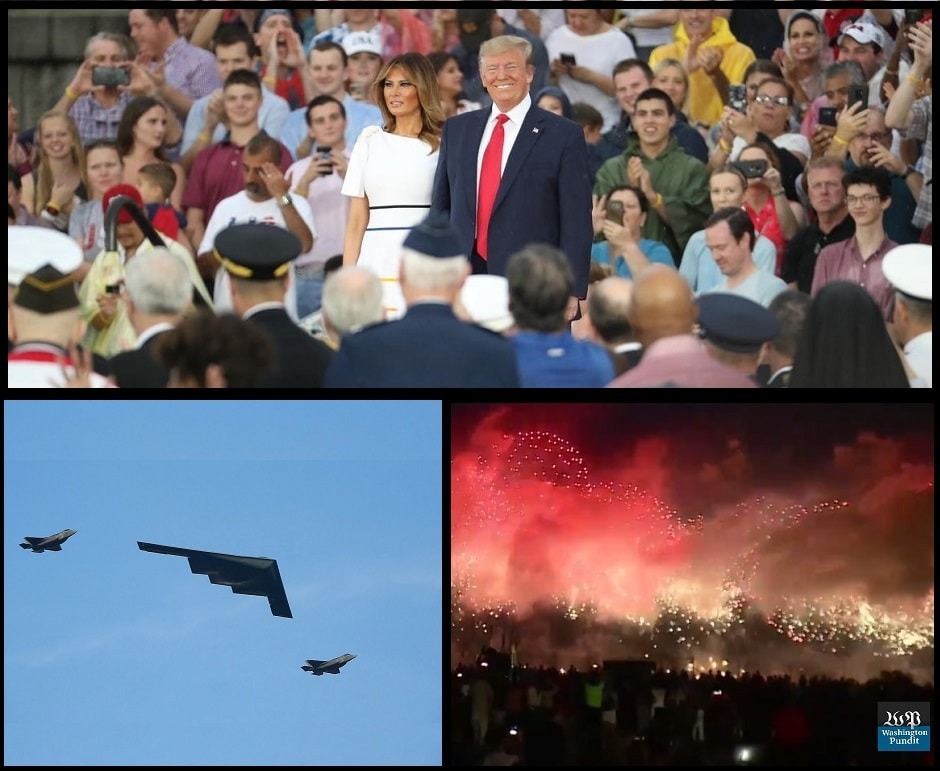 President Trump delivered a patriotic history lesson of the American military as stormy weather threatened the nation’s capital on July 4. Mr. Trump honored some of the members of the military in the crowd, as well as different branches of the armed forces.

“The future of the American future depends on the shoulders of men and women willing to defend it,” Mr. Trump said. “Now is your chance to join our military and make truly great statement in life and you should do it.”

Mr. Trump also honored other notable Americans, some famous and others who were in the crowd. He honored civil rights icons as well.

The Independence Day celebration has been knocked for how much it will cost taxpayers and the unusual focus on the military and the president himself. Further fueling the controversy, only ticketed attendees — VIPs and others who received tickets through the Pentagon or the Republican National Committee — were able to sit in a large fenced-off area up front. The rest of the public had to arrive on a first-come, first-serve basis much farther from where Mr. Trump was speaking.

Trump arrives back at the White House

Mr. Trump’s motorcade arrived back at the White House at 7:43 p.m. He is expected to remain there through the fireworks.

Mr. Trump wrapped up his speech and the military flyovers just before 7:30 p.m. with the song, “Battle Hymn of the Republic,” sung and played by the band near the stage.

Many Trump critics feared the president’s speech would dabble in politicized language, on the taxpayers’ dime. But Mr. Trump largely stuck to the script, offering historical snapshots and praise for the military.

Mr. Trump, as he often does at rallies, lingered on stage, waving and stopping for photos from guests on the stage.

Following the ceremony, the president and first lady are returning to the White House.

The fireworks, which technically aren’t a part of his “Salute to America,” begin shortly after 9 p.m.

As attendees looked skyward and pulled out their phones for pictures, aircraft from the Coast Guard, Air Force and other branches of the military flew overhead.

Air Force One also conducted a flyover during the program.

Here are the military aircraft that were expected to participate, according to CBS News’ David Martin.