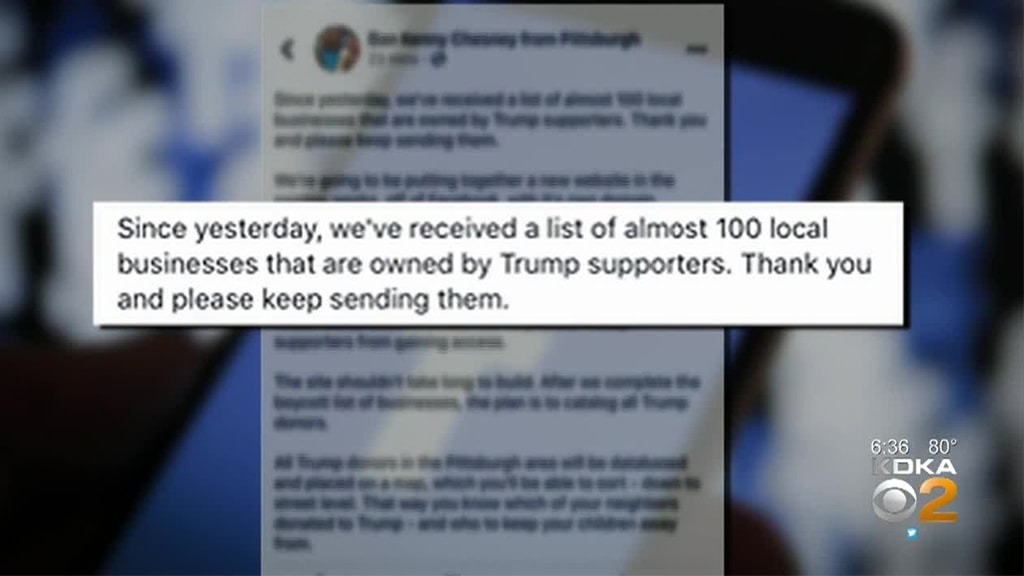 KDKA, the local CBS affiliate in Pittburgh says that local liberal blogger, Brian Broome asked the community for assistance in identifying locally owned business owned by Trump supporters. Broome also called for locals to boycott those businesses. He has received a lot of negative attention on Twitter and a strong response from the local GOP.

Local social media is abuzz over efforts in Pittsburgh to identify and boycott businesses owned by supporters of President Donald Trump.

“I think it’s important because people have a right to know where their money is going,” Pittsburgh blogger Brian Broome told KDKA political editor Jon Delano on Tuesday.

In a recent Facebook post, a page identified only as “Ban Kenny Chesney from Pittsburgh” says there’s a list of almost 100 local businesses owned by Trump supporters which will soon be disclosed on a new website.

As of Tuesday night, the Facebook page has been taken down.

“If there is a specific ideology that you don’t support, you are well within your rights not to hand that money to someone who supports that ideology,” says Broome. “Trump supporters have boycotted everything from Keurig to Nike, so I don’t know why, quote-unquote, the other side can’t decide not to give their money to businesses as well.”

The new website promises to include, “a database of Trump-supporter owned businesses in the Pittsburgh area, as well as tips for how to get those specific businesses closed down.”

“They want to cost people their livelihoods just because you don’t agree with them politically?” asks Allegheny County councilman Sam DeMarco, who also chairs the county’s Republican Party.

“It’s not just absurd, but I believe it’s dangerous.”