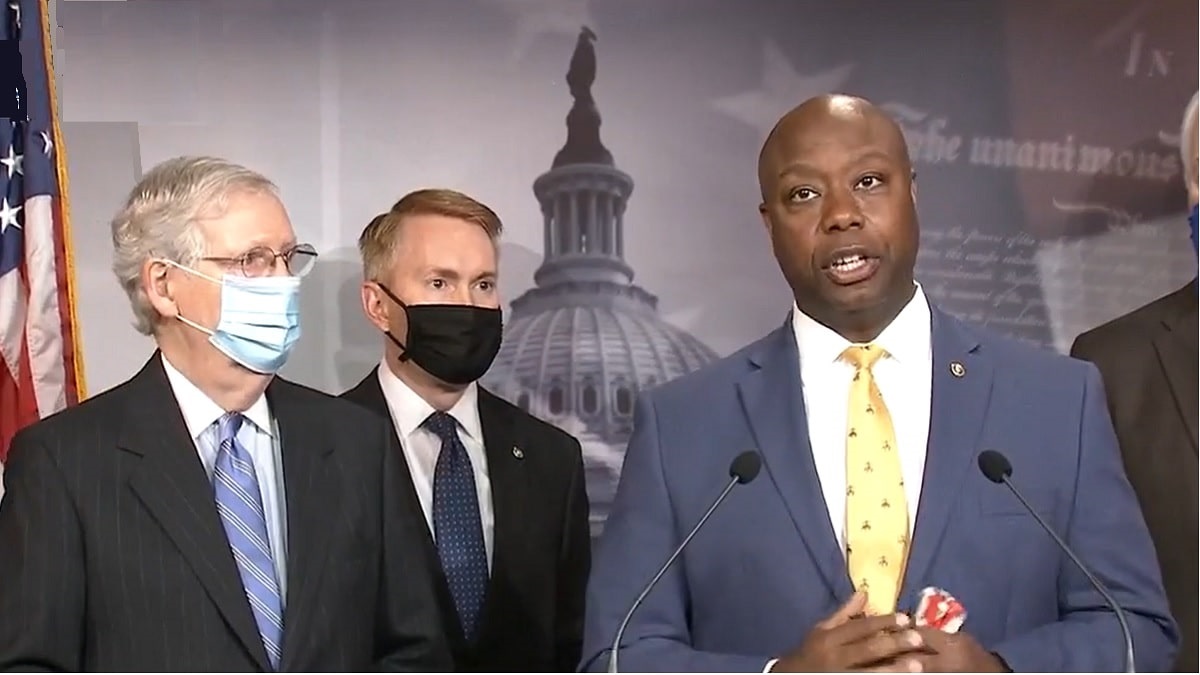 Washington, DC – The Senate republicans unveiled their police reform bill, called the Justice Act today. The bill is a mix of proposals designed to address “police reform, accountability and transparency”, according to Senator Tim Scott (R-South Carolina.) Scott was joined by a number of senators at a press conference where some details of the bill were announced. Scott described the group who authored the bill as ‘passionate about the issue’ and ‘a great team’ with extensive expertise in the senate.

In his opening remarks, Scott, who is black, while describing law enforcement said,

The overwhelming number of officers are good people, working hard, trying to keep order in their communities.

Addressing the nation’s black population, he emphasized that he had compassion for the issues confronting people of color in the U.S. He described several instances of being stopped by police himself, in episodes he termed ‘driving while black.’

We hear you and we are listening to your concerns.

Scott described three key areas the Justice Act addresses with respect to police reform. The first area mentioned was data collection and it’s importance to understanding how to make interactions between officers and suspects ‘safer’ when situations get heated. The bill calls for all information gathered when there is serious bodily injury or death of a suspect, be sent to the FBI for investigation and study. Currently, only about 40% of that kind of data makes it’s way to the justice department.

Scott gave the example of ‘no-knock warrants’ and the call to ban them. He stated that ‘we don’t have any data on no-knock warrants’, so banning them without knowing if they are a source of significant altercations wouldn’t be prudent. He stressed the importance of data gathering, reporting and analysis before making decisions to ban certain common law enforcement practices.

The second point the bill addresses is the need for better officer training. Teaching the better restraint methods, self-control techniques and de-escalation training would be part of the changes, rather than banning certain practices, such as choke-hold out right. This is notably different than President Trump’s proposal, revealed yesterday, which would ban choke-holds.

The final point addressed by the bill involves incidents of police force and brutality. This would include preservation of records of complaints against officers and having those records available on a broader level for law enforcement officials to assess the work habits of their police force. The president’s order would create a national database for this information to flow into.

Democrat lawmakers, who unveiled their own proposal for police reform last week, are already criticizing the GOP plan as not going far enough to end the alleged problem of police brutality. The “Justice in Policing Act” would ban choke-holds, set up a tracking system for no-knock warrants, provide funding for de-escalation training and add a requirement for law enforcement at a scene to intervene to prevent excessive use of force.

You can read the Senate republican’s Justice Act proposal here.