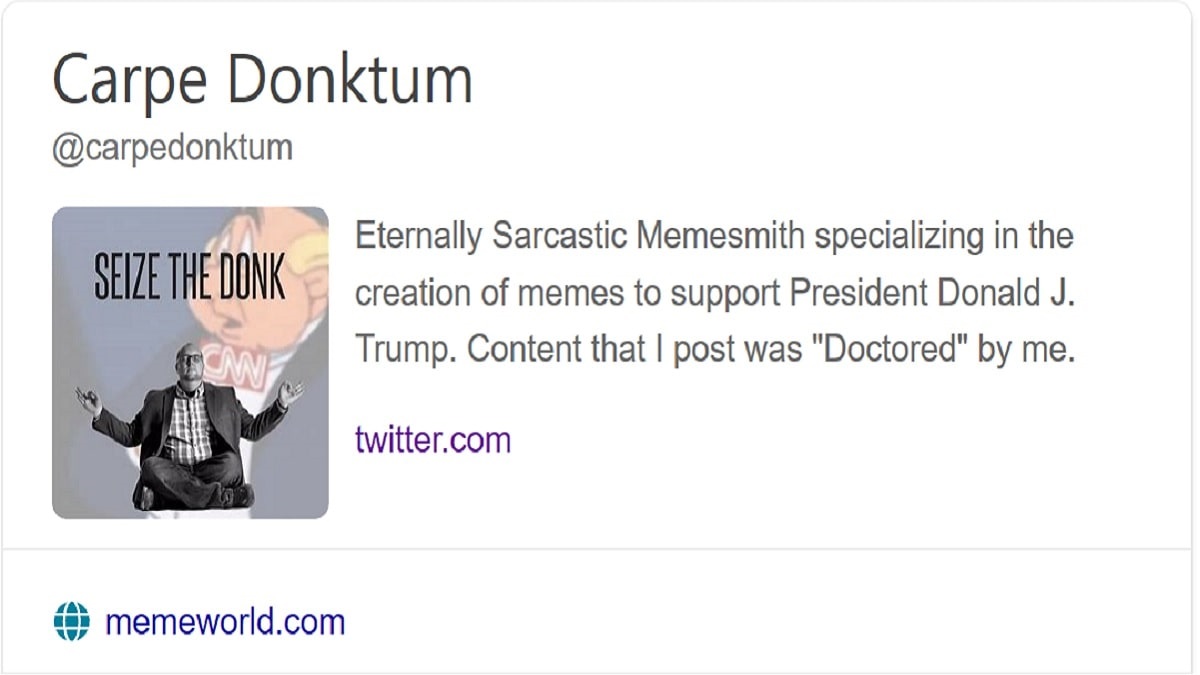 Twitter has permanently banned Carpe Donktum from the platform. A prominent pro-Trump meme satirist, Carpe Donktum aka Logan Cook, found that his account was suspended for “repeated violations of copyright infringement.” The account boasted more than 270,000 followers on Twitter.

The latest infraction, according to Twitter, was a meme video where the satirist took a public domain clip of two toddlers hugging and then running away from each other. The “manipulation” came in the form of making it appear that CNN had aired a story about the babies having a racist exchange. Obviously, the meme was meant to be a take on the irrationality of the left in pointing out racism at every turn. The lastest incident of a ‘noose’ hanging in Bubba Wallace’s NASCAR garage, which actually turned out to be a pull rope for the door, is a case in point.

President Trump shared the meme last week because he, unlike the sensors at Twitter, has a sense of humor.

The video’s original owner complained to Twitter about copyright. The father of one of the boys, whose video was featured on CNN last year, filed a DMCA takedown notice over the Carpe Donktum meme.

Per our copyright policy, we respond to valid copyright complaints sent to us by a copyright owner or their authorized representatives. The account was permanently suspended for repeated violations of this policy.

Carpe Donktum has since moved to Parler, a free speech competitor to Twitter which claims that it will not censor anyone who abides by the platform’s rules. Parler has been open for business since late 2018, but has only recently come into headlines as Dan Bongino, former Secret Service and current podcast host and frequent Fox New contributor, has taken an ownership stake in the platform. Parler has seen an explosion in growth since the announcement last week.

BONGINO STAKES A CLAIM IN PARLER

Carpe Donktum made a statement on his Parler account:

I have been Permanently Suspended by twitter for the Todler video that President Trump tweeted last week.

I received a DMCA takedown order this morning for that video, and a few hours later a suspension letter.

Twitter has not provided me with any avenue to get my account back, so I assume they intend this to be final and permanent.

He claims that the original video used was in the public domain and protected by the law under satire and parody. He also warned that a second account on Twitter claiming to be an alternate account for him is a fake.