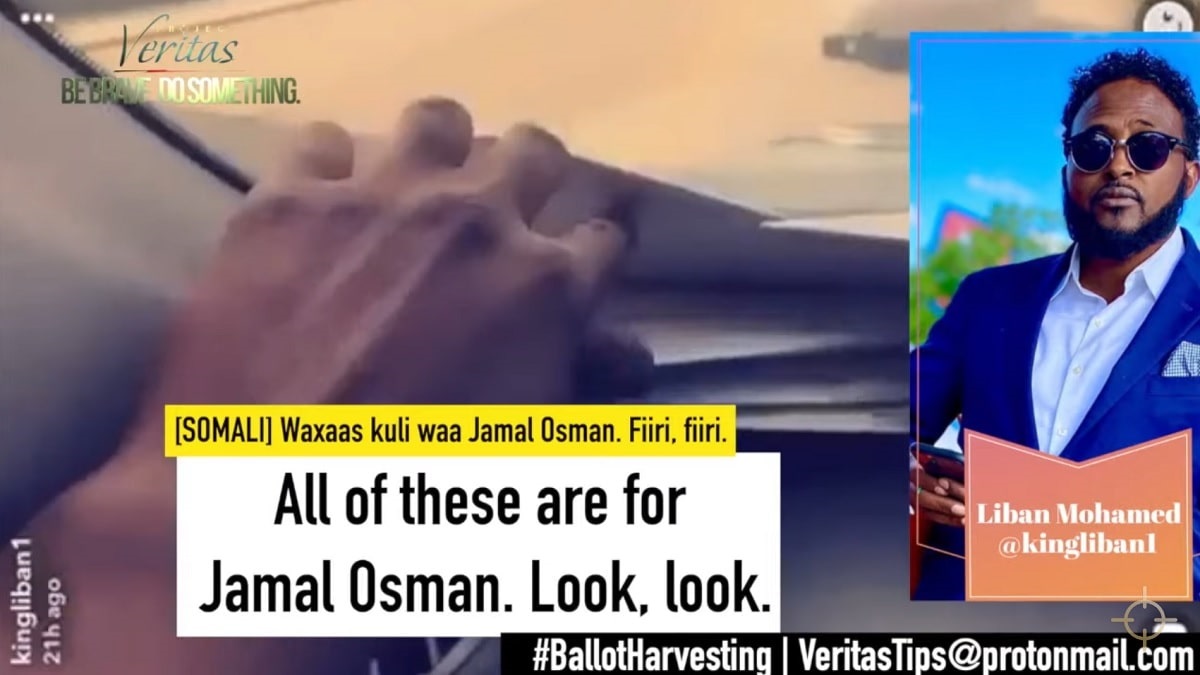 A new exposé by James O’Keefe’s Project Veritas has exposed a massive a ballot harvesting scheme in Minnesota, that was committed by a group of people with apparent ties to Rep. Ilhan Omar (D-MN).

In the nearly 17 minute-long undercover video, O’Keefe’s investigative reporters show video of an alleged ballot harvester named Liban Mohamed incriminate himself as being part of the scheme to harvest ballots from elderly Minnesotans. Mohamed is the the brother of Minneapolis City Council member Jamal Osman, who beat out 10 other candidates to win his seat.

In the video which was posted to Liban Mohamed’s instagram page in July, he can be seen flipping through piles of ballots littered across his dashboard. Speaking in both English and Somali, Liban is seen driving around Minneapolis collecting ballots from senior citizens.

It’s an open secret…she [Omar] will do anything that she can do to get elected and she has hundreds of people on the streets doing that.

Numbers don’t lie. You can see my car is full. All these here are absentee ballots. . . . Look, all these are for Jamal Osman…

Money is the king in this world . . . and a campaign is driven by money.

According to Omar Jamal, who chairs the Somali Watchdog Group, immigrants like Liban Mohamed are paid to collect absentee ballots from senior citizens and immigrants in the community. Jamal states that this ballot harvesting scheme was conducted on behalf of Minnesota’s Democratic-Farmer-Labor Party, a left-wing socialist collective. Rep. Ilhan Omar has become a “major power broker” in the organization. At leat one source in the video has linked Ilhan Omar’s campaign manager, Ali Isse Gainey, to the illegal ballot harvesting scheme.

Jamal says of the voter fraud occurring in Minnesota,

They don’t care how they did it. We win. And that’s it.

The rules and regulations…if you ignore that and you let corruption and fraud become a daily business, and then tough luck. The country will not exist as they know it.

In Minnesota, gathering ballots from more than 3 people is illegal. It’s also a federal crime. For anyone who votes for others illegally, the penalty is up to 5 years in prison and a $10,000 fine.