Home 2020 Election Chairman McConnell… The US Senate Majority Leader Is ‘Married’ to China. 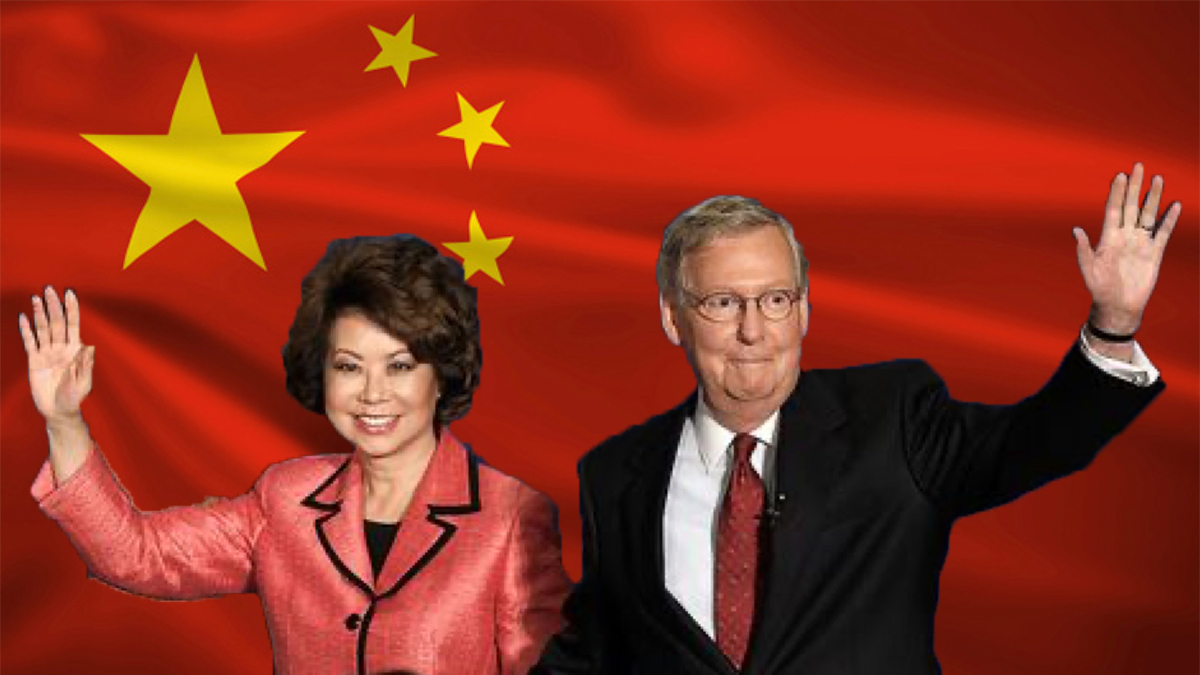 When Mitch McConnell came out recently and congratulated former VP Joe Biden for becoming the official President-Elect, conservatives and Trump supporters were shocked. Apoplectic would be a more correct reaction.
Of all the people to jump onto the Deep State / Big Media / Big Tech Democrat narrative with both feet who demand that China Joe is to be our President come January 20th, the last person we expected to see was the Senate Majority Leader, the highest office in the land below the Executive Branch.

Mitch has TOTALLY let the country down. Unimaginable that he would accept the voter fraud for which new evidence piles up daily. “Officially a President and Vice President-elect”? Beyond despicable. Apparently, Mitch has shown his stripes… more accurately, he has shown his stars.

How is this possible? What is going on here?

According to the AP, Mitch McConnell, on a call to fellow GOP Senators,

urged them not to join President Trumps ‘extended Assault on the Electoral College results.

McConnell worked to push ahead to the Biden era and unite a fractured Republican Party ahead of the runoff elections that will determine Senate control.

First, the Republican leader heaped praise on Trump’s “endless” accomplishments as he congratulated President-elect Joe Biden during a morning Senate speech. Then he pivoted, privately warning Republican senators away from disputing the Electoral College tally when Congress convenes in a joint session Jan. 6 to confirm the results.

Most on the side of President Trump could not fathom Mitch McConnell taking this sudden swing towards allowing Communism into our country. Were he and his family threatened or given an offer he could not refuse?

No. It turns out the answer is much simpler than that. Mitch McConnell is married to … Elaine Chao of the Chao Family Dynasty. Elaine Chao is said to be one of the most powerful women in Washington. Chao is currently President Trumps Secretary of Transportation. She also served as one of 12 White House fellows in the Reagan Administration. She was Deputy Secretary of Transportation under George H.W. Bush in 1989 thru 1991. The senior Bush appointed Chao as director of the Peace Corps.

Upon seeing this, one would think Mitch’s marriage to Chao is positive for Mitch and his support for our President and our country. That supposition might be incorrect.

As it turns out, Elaine Chao is the daughter of Shipping Magnates James and Ruth Chao. In 2016, Elaine Chao’s sister Angela Chao was appointed to a non-executive position on the board of directors for the Bank of China, just 10 days after Trumps’ victory for the Presidency. She and her father also sit on the board of directors of the China State Shipbuilding Corporation, Chinas largest defense contractor.

When Elaine’s mother Ruth passed at age 77, Elaine and Mitch received a multi-million dollar payment thru Ruth Chao’s will.

According to The World Tribune, Peter Schweizer, on the April 23rd edition of SiriusXM’s Breitbart News Tonight said:

So when [Donald Trump] gets elected in 2016, China is in a panic. So one of the things that happens is, they appoint, really, the first American, or only the second foreigner to the Bank of China.

Now, the Bank of China is government-run, government-controlled, is sort of the backbone of the Chinese government’s economic diplomacy around the world. Ten days after Donald Trump is elected, they put Elaine Chao’s sister – Mitch McConnell’s sister-in-law – on the board of directors of the fourth largest bank in the world, which is run by the Chinese communist government. It’s a shocking development, and, again, unprecedented in American history that you would have senior political leaders have immediate family members that are sitting on the board of foreign government-owned businesses

So Mitch McConnell, the Senate majority leader, his wife Elaine Chao, who’s the transportation secretary in the Trump administration, her family has deep economic and financial ties to the Chinese government itself. They are in the shipping business, and they own something called the Foremost Group, and really, in 1993, Mitch McConnell, as a senator, travels to China with his father-in-law, James Chao, as guests of the China State Shipbuilding Corporation

The China State Shipbuilding Corporation is the largest defense contractor in China, and the projections are that by 2030, if current trends continue, they are going to surpass the U.S. Navy as far as naval capability. Basically, what happens is, the China State Shipbuilding Corporation says to the Chao family, ‘Look, we will build your ships. We will finance the purchase of some of your ships. We will provide crews for your ships. We will provide contracts for you to ship state-owned goods from state-owned companies around the Pacific. In other words, we are going to set you up in the shipping business,’ which is exactly what they do, and, in fact, James Chao — this would be Elaine Chao’s father, Mitch McConnell’s father-in-law — and Elaine’s sister, Angela Chao, actually joined the board, in 2007 and 2008, of something called China State Shipbuilding Corporation, CSSC Holdings, which is a subsidiary of the largest defense contractor in China. So you have this powerful American political family that is making U.S. policy related to China, related to trade, and other critical issues that is highly dependent upon the good graces of the Chinese government

Schweizer goes on to say:

[McConnell, Kentucky Republican] benefited because a few years ago, James Chao gave Mitch McConnell a gift between five and twenty-five million dollars that more than quadrupled his net worth overnight. So this is not just about Elaine Chao’s family getting wealthy. That wealth has now trickled into Mitch McConnell’s pocket, as well, and it’s a huge problem because if you chart the positions that Sen. McConnell has taken on China over the last 20 years, guess what? Shock of all shocks, he has become increasingly soft as it relates to China, and I think it is directly related to the fact that he knows his family’s financial future is tied to the good graces and good faith of the Chinese communist government.

The Chinese government, according to Schweizer was ‘freaked out’ over the election of Trump.

So the election of Donald Trump, there’s no other way to say it, it completely freaked out the Chinese government because Trump has really been focused – whether one agrees with him on trade policy or not – he has focused since the 1980s on what he regards as a rising threat of China; whether it relates to trade, economics, or military power.

Mitch has a few new names… one of which is now permeating through the Patriot ranks across the country: RINO… (Republican In Name Only). There is nothing worse for a Republican politician to be called.

It sounds more like the multimillion-dollar Mitch is trying to keep himself the leader of the Senate, sacrificing President Trump’s obvious landslide victory, the US Constitution, and We The People with it. This is unacceptable to every Patriot in this country; yet another Deep State Republican shows his hand. Bad move Mitch … really bad move … trying to save your own skin at the cost of the entire country is completely unacceptable and will most likely see you taking a flight with all the other Deep State operatives down to Gitmo.

The American Patriot, We the People, who legally ELECTED President Trump will never forget this Mitch.

You have sold us out.