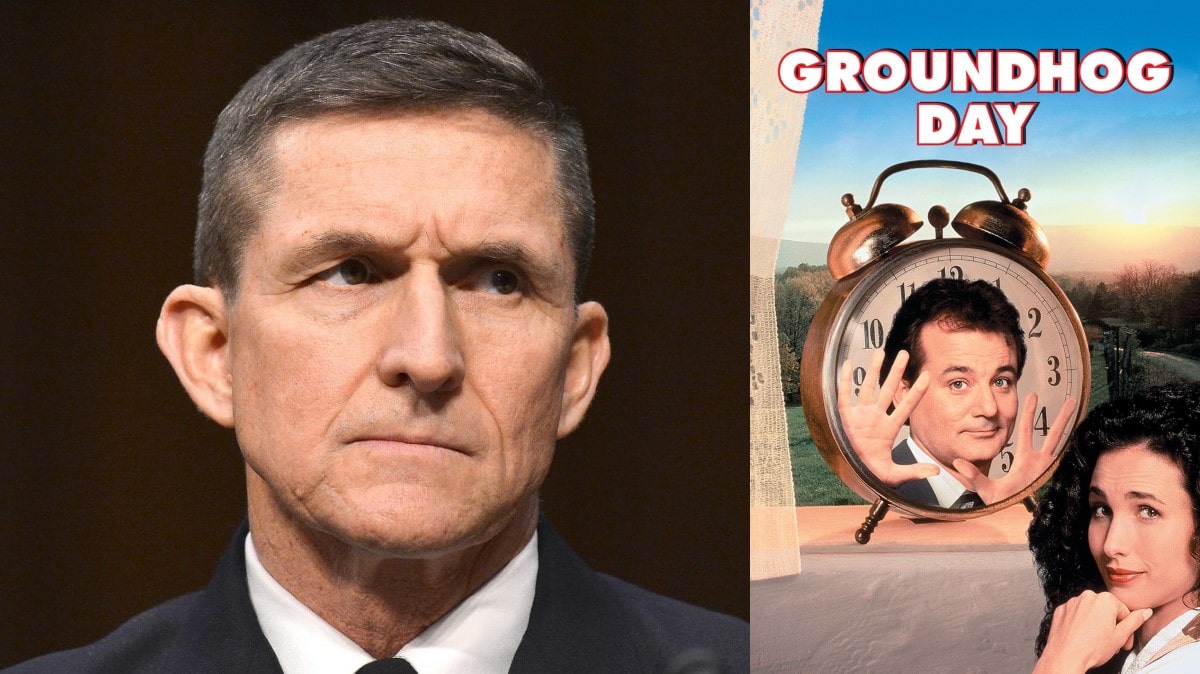 For anyone following the saga of Lt. General Michael T. Flynn (Ret.), the one theme that helps explain the case is:

As reported last Friday by The Washington Post, the same outlet that was complicit in the FBI scheme to get Flynn fired as National Security Advisor (NSA) in the first place, The Department of Defense (DOD) recently concluded a long-delayed investigation into Flynn’s business dealings during his time as a private citizen in between serving as the Director of the Defense Intelligence Agency (DIA) under President Obama and his appointment as NSA by President Trump.

As The Washington Post‘s crack staff of Pulitzer Prize winning Pee-Pee Hoax journalists reported, Flynn was being investigated for payments he received during his time in private business related to “Russian and Turkish interests before joining the Trump administration“.

The article harkens back to The Washington Post’s own 2017 reports about Flynn’s supposed ‘Logan Act violations’ related to his December 2016 call with Russian Ambassador Sergey Kislyak. Again the Post appears to be coordinating with Deep State actors to spin a media narrative and legitimize a political persecution using a dubious (to say the least) legal theory. Namely violations of the Emoluments Clause.

As TWP has reported in the past, the Emoluments Clause of the U.S. Constitution, can be categorized in the same sphere as violations of the Logan Act of 1799 which no one with any knowledge of U.S. law takes seriously and are simply used as threats by politicians to target their political opponents.

The first accusation centers around Flynn’s 2015 speaking engagement in Moscow at a banquet to celebrate the tenth anniversary of the Russian state-owned media organization Russia Today (RT). Flynn made the appearance along with former Green Party presidential candidate Jill Stein who both had the trip arranged and were paid to give their speeches by their speakers’ bureau, Leading Authorities, Inc.

The payment to Flynn from Russia dates to 2015, when the retired general appeared alongside Russian President Vladimir Putin at a gala dinner for RT, a Kremlin-controlled media organization. He was paid $45,000 for doing so.

The appearance has been used to falsely smear Flynn as a secret agent for Russia. Stein also wound up being accused of being a “Russian asset” by Hillary Clinton, which is an epic backfire since Stein herself was one of the Trump-Russia Collusion Hoax originators.

One of the most vocal purveyors of the RT banquet smear is none other than Congressman Adam Schiff who cites the appearance as one of his examples of “evidence in plain sight” of collusion. It’s an odd claim for Schiff to throw around since he has made several appearances on RT himself.

Flynn was asked to make the trip by the DOD, was given a defensive briefing before he left for Moscow and immediately debriefed upon his return by U.S. Intel, and was given instructions about information he should try to glean from Putin if presented an opportunity. Flynn was acting as a spy for the United States while on the trip, not attempting to sell out to the country he had spent over three decades in uniform fighting against.

You know the irony? I joined the military to fight the Russians.

Lt. Gen. Michael T. Flynn’s (Ret.) last words to his Deputy NSA K.T. McFarland as he walked out of the West Wing for the last time on the night he was forced to resign

The other accusation being leveled at Flynn is he had acted as an illegal foreign agent for the government of Turkey.

Flynn later disclosed that he also worked as a foreign agent representing Turkish interests for the Netherlands-based company, Inovo BV, which paid his company, Flynn Intel Group, $530,000 in 2016. The company was founded by Kamil Ekim Alptekin, a Turkish businessman, and lobbies on behalf of the Turkish government.

As TWP has reported in detail, Flynn never worked directly or indirectly for the government of Turkey. Flynn’s company, the Flynn Intel Group, was hired by a private Dutch-Turkish businessman & entrepreneur named K. Ekim Alptekin to conduct private investigative work related to an Turkish Islamic cleric named Fethullah Gülen living in self-imposed exile in the United States and his Gülenist Movement or “FETO”. Alptekin had hoped to produce a “proof of concept” lobbying effort he could use to convince the Turkish government to explore entering into their own contract with the Flynn Intel Group.

There was a hastily arranged “meet and greet” in September 2016 in the margins of the UN Headquarters during regularly scheduled annuals meetings since the parties happened to already be present. At Alptekin’s insistence, some Turkish government officials and the Flynn Intel Group agreed on an introduction, more to placate Alptekin than anything. But their engagement never went beyond that, and the existing commercial contract the Flynn Intel Group had with Alptekin’s Dutch company Inovo BV was never discussed.

TWP reached out to Alptekin for comment in response to him being named in The Washington Post article.

[I] just read the entire article. When will they get it into their heads that I never represented the government of Turkey? The truth is the U.S. government has every tool at their disposal to check whether or not I’m lying. Its been several years now. If I had been an agent of Turkey they would have a mountain of evidence. I almost wish I was. At least they might pay for my legal bills.

The Washington Post also took time to smear freshman Congressman Ronny Jackson (R-TX), a retired U.S. Navy Rear Admiral and former White House physician for both Presidents Obama and Trump. Jackson is considered a raising star in the Republican Party and has been the target of relentless personal smears dating back to his time at the White House when President Trump nominated him to be Secretary of Veterans Affairs (VA).

The Washington Post article makes it apparent this is likely part of a coordinated smear campaign and further weaponization of the powers of the American government to target, harass, prosecute, and bankrupt political opponents.

The investigation was put on ice four months into the Trump administration and only resurrected after Pres. Trump pardoned Flynn and just by coincidence concluded one week after Biden was sworn in. The details then just happened to leak to the same publication Deep State actors within The Pentagon have been leaking to throughout the Spygate scandal to smear and frame Flynn and other political opponents. Sure … nothing suspicious there.

And again, using the Emoluments Clause of all things as a basis for an investigation is laughably absurd. The Emoluments Clause was never intended to be interpreted or used in this manner. Like ‘The Logan Act’, it is simply a relic of the colonial period when the Founders feared interference by foreign monarchies would cause the newly formed United States to collapse. It has long since outlived its purpose and is being used to politically target Flynn, and President Trump before him, which reeks of corruption. Democrats and the Pentagon Brass might want to learn from the aforementioned Jill Stein and reconsider before laying down a precedent that could backfire on them down the road.

Our new Secretary of Defense, Lloyd Austin, sat on the Board of Directors of the defense contractor Raytheon before taking his role in the Biden administration. His compensation from Raytheon and other sources of income could easily get weaponized into an Emoluments Clause investigation such as looking into the $8 billion arms sale Raytheon made to Saudi Arabia and the United Arab Emirates in 2019 or the recent Raytheon weapons deal the Biden Administration made with Chile. Secretary Austin himself is a retired four-star general who left the U.S. Army in 2016 after heading U.S. Central Command (CENTCOM) which oversees all U.S. military forces in the Middle East. Austin seems to be a prime example of “failing upwards” having overseen the disastrous Obama administration attempt to train moderate rebels to fight in the Syrian civil war against President Bashar al-Assad and the newly forming ISIS caliphate. Ironically, this is the same John Brennan and CIA led program that Flynn warned in the congressional hearings pictured above was providing funding and arms to Islamic extremists who were even more radical than Al Qaeda. The program would lay the foundation for the rise of ISIS and Flynn’s warnings led to his firing as Obama’s DIA.

Army General Lloyd Austin, in charge of the anti-ISIS war effort from the U.S. Central Command, testified before the Senate Armed Services Committee on Wednesday that only “four or five” members of the U.S.-trained moderate rebel force are still fighting the Islamic State in Syria … A $500 million program that has, at best, five men currently deployed in the field, and 120 more in the pipeline.

From the Breitbart article “CentCom General: Only ‘4 or 5’ U.S.-Backed Moderate Rebels Still Fighting in Syria”

Austin’s predecessor former Secretary Mark Esper also came into his role from Raytheon having been their chief lobbyist and Vice President of Government Relations. Esper was a constant problem during President Trump’s final year often undermining his authority and leading to a serious breakdown in the regular order between the commander-in-chief and the U.S. military. Esper was fired by President Trump the day after the the November 8th presidential election.

When the military becomes an independent political force … it’s over … democracy dies.

So it appears the Deep State has not given up. They will continue to hound Flynn to the ends of the Earth using every method, mechanism, and means they can dredge up no matter how ridiculous. The only question is why? Is Flynn still that dangerous to the Establishment or is it just a warning to others who might choose to challenge their power?

I am not done.