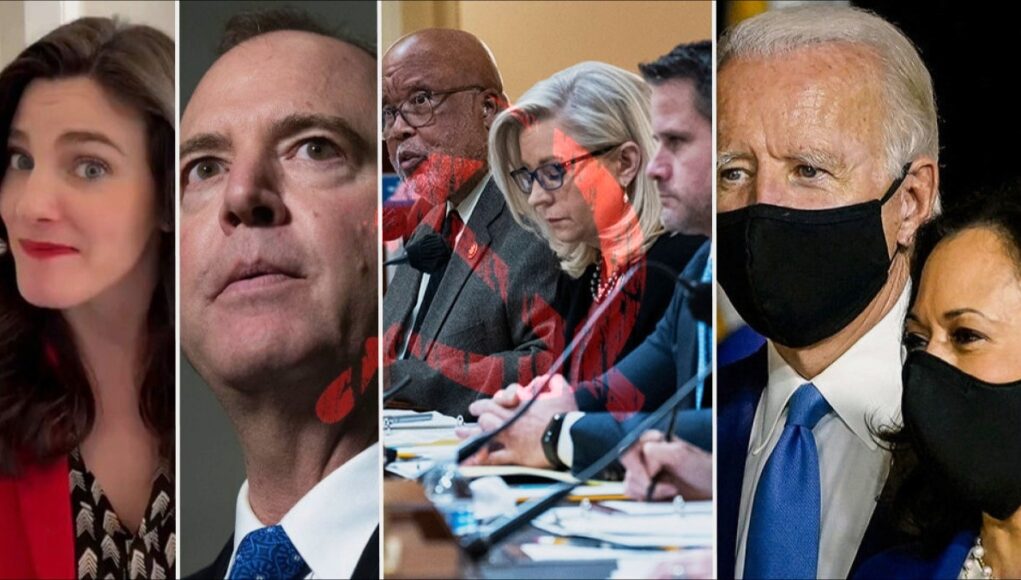 Americans with any intellectual honesty or sense of decency are appalled at the circus currently occurring under the guise of “investigating” the January 6, 2021 riot at the U.S. Capitol. On the one hand, it is a clear effort to grandstand and put the leftist Democrats on their phony “moral high ground.” Yet in another sense, it reflects a widespread pattern of extremely toxic behavior in the Federal Government; one that Americans must recognize as an imminent threat to their freedoms, and to the future of the Nation.

As standard procedure in the sham “hearing,” professions of total deference to the leftist Orthodoxy are becoming obligatory. The pattern of conduct among Democrats, and those who have sold out to them, is textbook for aspiring tyrannies, in which a government illegitimately in power with no “Consent of the Governed” seeks to maintain a facade of standing and invincibility through sheer force and intimidation. Clearly, that is where the Democrats of 2022 find themselves. And their fanatical efforts in this regard can only be expected to intensify.

The electoral patterns of recent weeks have been unwaveringly in favor of the American people, which makes them loathsome to Democrats. The tide has turned even in longstanding Democrat strongholds, such as Texas Congressional District 34, which hasn’t voted anything but Democrat in over one hundred and fifty years and is heavily Hispanic. As of the June 14 special election, it is now represented by Republican Mayra Flores, a Patriotic and Conservative American of Mexican descent. If this pattern continues, you can expect the DNC to suddenly support the construction of the biggest border fence since the Great Wall of China!

All across our land, people are awakening to the sheer emptiness of Democrat promises of leftist “bliss,” as this once thriving Nation is increasingly ravaged by shortages, escalating crime, rampant inflation, and perverse attacks on children in government schools, and every other plague of the socialist counterculture. This was clearly not how the majority voted in the stolen presidential election of 2020, and everyone knows it.

So what is the leftist Democrat response? In an abominable, yet thoroughly predictable manner, Democrats are locking down, with every intent on forcing the Nation not only to submit to their twisted and dangerous ideology but to fully endorse and embrace it under threat of retribution. That is the real message of the January 6 committee. Not surprisingly, along with the standard cavalcade of shameless leftist liars such as the puerile and contemptible Adam Schiff (D-CA), they have garnered a sufficient number of RINO cowards and traitors to apply that coveted stamp of “bipartisanship” to the charade.

Perhaps their biggest quarry was former Trump Attorney General William Barr. Having given the impression early on of being a dogged advocate of truth and justice, Barr suddenly flipped in a manner disturbingly similar to Chief “Justice” John Roberts, back when he betrayed the Constitution by upholding Obamacare. Roberts has been a reliable leftist pawn ever since. Barr absurdly claims that no evidence of electoral fraud in 2020 exists, as if he has the force of personality or standing to drive out of existence the massive, unspeakable criminality of that event, which was widely witnessed and condemned by Americans across the land. Instead, Barr has only ensured that his place in history will be among the footnotes of defilers of the truth, and traitors to the Constitution.

As it drags on, the January 6 “hearing” is falling completely flat with America. Inane claims of the event in question as an attempted “insurrection” by Donald Trump no longer resonate, and outside of leftist circles they never really did. In stark contrast, the Nation increasingly suffers the dire repercussions of the real coup, perpetrated by the Biden Cabal, consummated by the Democrats on January 6, and abetted by a Fake News media that is embarrassingly fawning and compliant.

So in the standard manner of any aspiring dictatorship, Democrats double down on their efforts to eradicate opposition. They have descended from the absurd and profane to the illegal, yet they continue. As the talk on “Main Street” across the land grows ever more derisive and hostile to the ugly reality of their agenda, and voting patterns tilt so severely that even with all of the horrendous cheating and fraud, Democrat-run “elections” cannot be sufficiently swayed in their favor, they are becoming even more panicked.

To nobody’s great surprise, the Biden Cabal is attempting to establish yet another “Ministry of Propaganda,” in hopes of tamping down the truth. Despite the rapid collapse of their last attempt under the abrasive and condescending Nina Jankowicz in April and May, they apparently think they can make it all work this time under the headship of the even more abrasive and condescending Kamala Harris! Yes, the leftist Democrats really are that delusional.

Results from their “upgraded” effort this time because they intend to play the race/gender cards, including the now obligatory fawning to the gender-dysfunction community. Any truths from Real America that this crowd finds distasteful will now be officially deemed “abuse.” By focusing attention on such esteemed icons of “victimhood,” the expectation is that potential critics will be reluctant to go after the effort with the same intensity that Jankowicz received. On her watch, the organization attempted to declare opposition to the Biden Cabal and talk of the stolen 2020 election “terrorism.” That didn’t fly. But maybe they’ll now get away with just calling it a “mental disorder, “bullying,” or some other predictable pejorative.

This is the nearly unbroken pattern that civilization has faced throughout all of human history. The self-serving power monger inevitably reverts to lies, intimidation, and eventual brutality in order to maintain a pretense of control. But in stark contrast to its seeming impenetrable dominance, such behavior reflects grave vulnerability. A government built entirely on darkness lives in the constant terror of being unmasked by light. And that’s why the best response from Americans to this governing malignancy is to diligently and resolutely expose its smug arrogance by speaking the truth.