Home Adam Carter UPDATE: Maricopa Had A Democratic “Heat Map” Too … That Makes it... 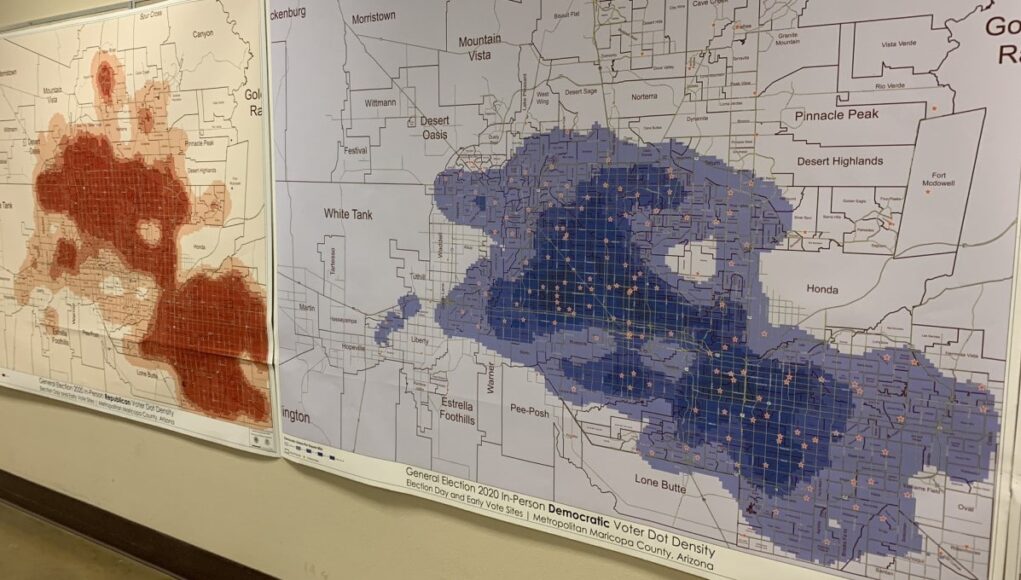 Yesterday, The Washington Pundit reported about information shared out by Richard “The People’s Pundit” Baris. The column was specifically about a photograph he took showing a “Heat Map” inside the Maricopa County Tabulation and Election Center (MCTEC) titled:

When Baris shared the picture on his Inside The Numbers (Episode 307) podcast, he stated at the 3:55 min mark:

It appears, however, Baris did not remember correctly. Since our story was first published, photos have emerged of the full, blue-shaded map off to the right of Baris’ original photograph. It appears to, in fact, be a comparable heat map showing “General Election 2020 In-Person Democratic Voter” turnout.

In a sort of inverse “Republicans Pounce” reaction, Hobbs supporters are using the existence of the Democratic map to attack and discredit the story as a whole. As TWP noted in our original column—this was an interesting, but immaterial detail to the story.

Baris himself noted at the time in his podcast,

Anyone discounting the entire story—based on Baris’ misrecollection—has failed to explain how the presence of the Democratic map would have prevented Maricopa officials from tampering with election equipment destined for Republican-heavy polling locations. If anything, this is more problematic. It means officials could have been able to cross reference to ensure equipment destined for Democratic-heavy polling locations was not tampered with, and in perfect working order before being sent out.

The other issue, as we quoted Baris in our prior column,

So having the second Democratic heat map just means the expenditure by Maricopa County was at least double the cost than previously believed. All this for information that no other election officials—to Baris’ knowledge—anywhere are collecting and plotting before election day. As Baris stated quoting an election official from Carteret County, North Carolina (paraphrasing):

While it is unfortunate that Richard Baris uncharacteristically got this minor detail wrong— that led TWP to need to issue this correction— this doesn’t make the story any better. If anything, it’s gotten somewhat worse.

So Maricopa … you’ve still got some splainin’ to do.