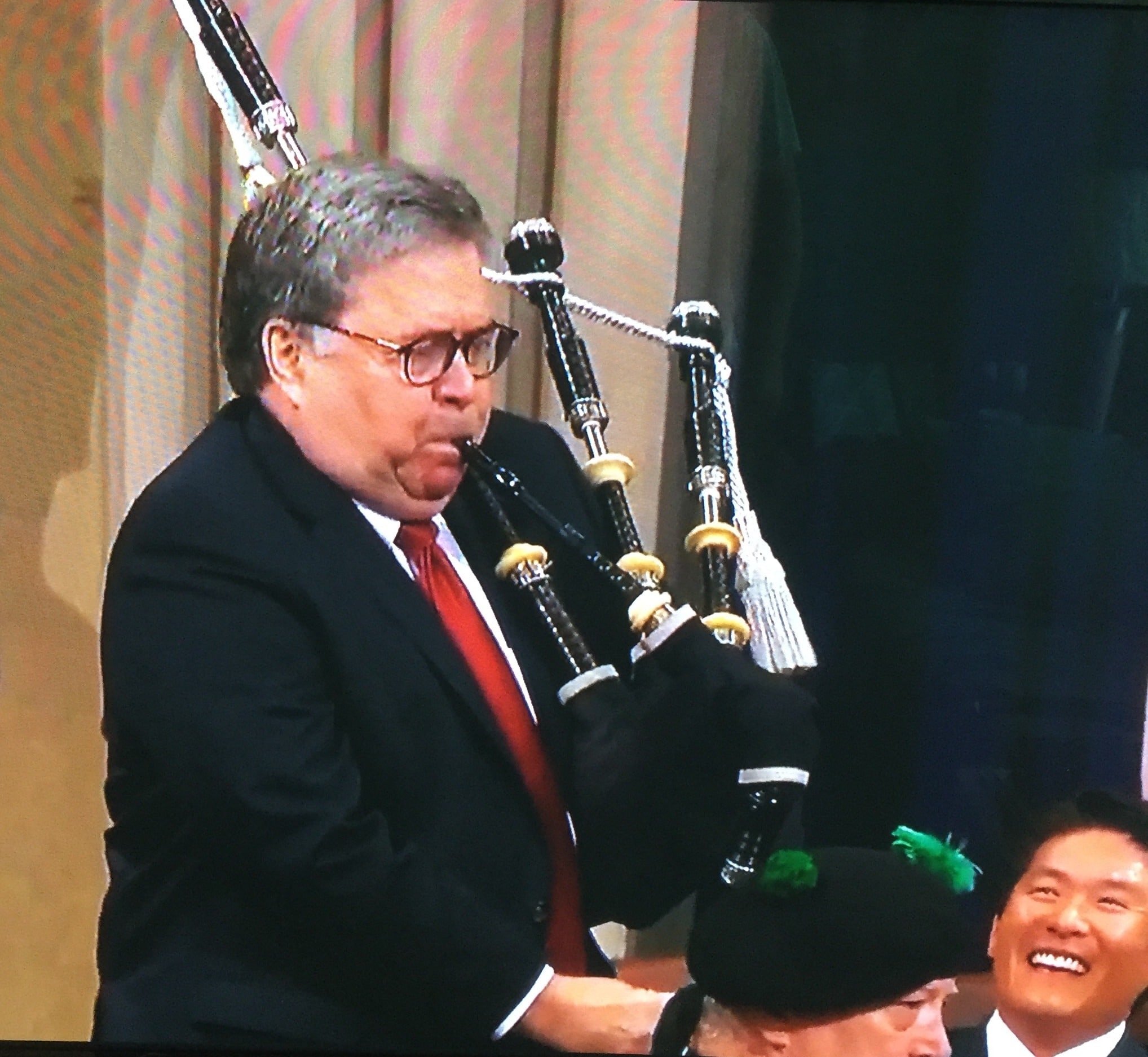 Attorney Bill Barr opened the meeting of the US Attorney’s by accompanying New York City Police Emerald Pipe Band on bagpipes. AG Barr upon concluding asked, “How’s that for an ice-breaker?”

He mentioned that conference staff thought to surprise him with the performance, but since he was “proficient at spying” he discovered their plot and this was his counterattack.

Barr went on to tell a few jokes and reminisced about the last time he played bagpipes, December 8th at his daughter’s wedding, just one day after President Trump announce his installation as AG. He joked at his daughter saying he was the only father who could upstage his daughter on her wedding day.

Barr continued by giving a recount of the state of the department, the coordinated efforts of federal, state and local law enforcement, current challenges, priorities and victories

We remain focused on violent crime, drugs, immigration, and national security and also a number of specific initiatives.

I’ve been struck by the contradiction of things you experience every day. Law enforcement efforts are at their all-time best, with dedicated agents working tirelessly, Federal law across the country exhausting resources. On the other hand the threats we face are harder and more complex than ever. We still see persistent violent crime, growing national security threats, growing national threats from illegal drug distribution and transnational criminal organizations.

Having written condolence letters to the families of five fallen officers in recent weeks, Barr continued by expressing his dismay at the recent rash of crimes against law enforcement:

I am proud of this administration‘s record on violent crime, we’ve made progress. But there are parts of the country where there has not been sufficient headway. Where crime is still the norm, we can’t accept it as the status quo. We will not tolerate violence against police and we will do everything we can to protect our law-enforcement officers.

On threats from terrorism:

In combating terrorism and terrorist threats, we can’t let our guard down. We must use all available lawful means to neutralize terrorists in the US and where we find them within our reach. The US relies on many tools to combat international terrorism and we’ll continue to prosecute them as one important means to protect our citizens by removing these deadly threats from the face of the map.

Barr expressed concern over the continued threat from the opioid crisis and illicit street drugs from fentanyl to the surge Mexican meth on our streets.

We must keep fighting and innovating to match this growing threat we also face the immigration problem on our southern border, we must tackle this problem. We must do all we can to support DHS and prosecute illegal entry cases and reentry cases.

Barr said that priorities for the department included intellectual property theft by transnationals, namely China; Elder fraud of our most vulnerable citizens, schemes which are often perpetrated by foreign entities; Human trafficking particularly when it involves children.

We must step up the fight in this arena.