Home Adam Carter Biden DOJ Has An Inherent Conflict Of Interest In The Trial Of... 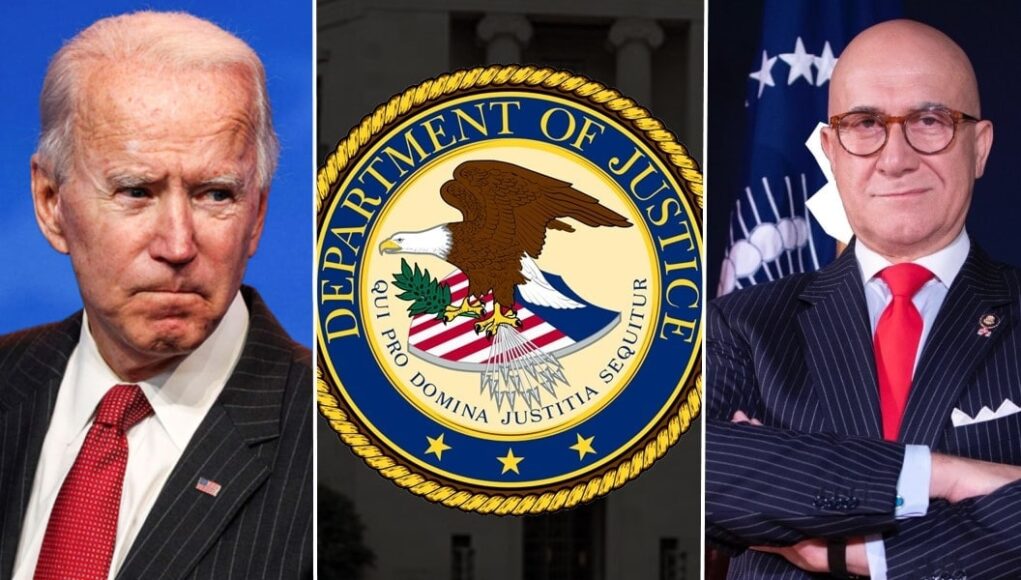 Based on stunning recent reports by TWP, Duvar English, and veteran journalist Cüneyt Özdemir, we now know Jim Biden (Joe Biden’s brother) and Sara Biden (Jim Biden’s wife) traveled to Turkey in 2019 to meet with Ekim Alptekin, a central figure in the investigation of the Flynn Intel Group.

The trip took place in the midst of two criminal cases brought by Mueller Special Counsel Investigation. Lt. Gen Michael T. Flynn (Ret.) was on trial in the District of Columbia for making false statements to the FBI. At the same time, both Bijan Kian and Alptekin were under indictment on charges of alleged Foreign Agents Registration Act (FARA) violations related to Flynn Intel Group’s private contract work investigating groups with connections to Turkey. Flynn was not charged in the FARA case due to his plea agreement with the U.S. Dept. of Justice (DOJ), but agreed to testify in the case as part of his cooperation agreement. He was however listed as “Person A” in the indictment making him both a material fact witness and unindicted co-conspirator in the case in the Eastern District of Virginia (EDVA).

What exactly was discussed during the meeting between the Bidens and Alptekin is yet unknown. Given the meeting took place sometime in 2019 however, that would mean it occurred right around the time both cases were seemingly in jeopardy of falling apart. It also appears the meeting came about in the first place due to the Biden’s curiosity about “the Flynn situation“.

Ekim Alptekin: Later on, when these things happened, they consulted with some mutual friends and decided to better understand what happened. Eventually, his brother [Jim Biden] and wife [Sara Biden] came to Turkey in 2019. I hosted them here in Turkey, arranged various meetings, explained and promoted Turkey. This is how I became acquainted with his family.

Cüneyt Özdemir: I did not understand, did you host the Biden family in Turkey? With whom did you arrange meetings? Did you arrange those meetings for his brother.

Ekim Alptekin: Yes, I arranged meetings with business people after being introduced to the family through some mutual friends. They know of my past, that I worked in Congress. They are well aware that the Flynn situation is not what it was made to look like. It was something they were curious about; we’ve discussed it and the process resulted with them coming to Turkey.

TWP laid out the exact timeline in our prior report. The key fact is Ekim Alptekin was either a co-defendant and/or a material fact witness in the trial of Bijan Kian and potential charges against Gen. Flynn in the EDVA when this meeting took place. The sets up a dilemma for the Biden DOJ.

Joe Biden had a vested interest in the outcome of criminal investigations involving Gen. Flynn. After all, Joe Biden is the one FBI handwritten notes revealed was the originator of the ridiculous “Logan Act” theory used to remove Flynn as Trump’s National Security Advisor in the first place. If both trials ended in acquittal or dismissal, and Joe Biden’s personal role in Gen. Flynn’s framing had been fully exposed, it could have spelled the end for his newly launched 2020 presidential campaign.

Any attempt to induce or coerce Alptekin to change his testimony, particularly in order to make false statements or omit evidence, could possibly constitute witness tampering, obstruction of justice, or some other criminal act. This creates an untenable conflict of interest for the DOJ under the direction of President Joe Biden and his political appointees. At the very least it creates an appearance of a conflict of interest that is alone enough to create serious concerns.

The Dept. of Justice’s mission is not to pursue prosecutions, it is to pursue Justice. As demonstrated during the Gen. Flynn case in the District of Columbia, there is a duty incumbent on the DOJ to continuously reexamine evidence to determine if a criminal case is still justified or if charges should be dropped, regardless of the where the case currently stands.

United States v. Rafiekian is a classic example of a case requiring reexamination by the government. DOJ already had to file a motion to dismiss charges against Gen. Flynn (Bijan Kian’s business partner) in a case brought by the same Office of Special Counsel once it was determined there was no predicate for the investigation in the first place. The FARA case in the EDVA was an offshoot of the same unfounded investigation meant to politically target Flynn. The trial judge in Kian’s case (U.S. District Judge Trenga) has already once granted a Motion of Acquittal and a Motion for New Trial on the basis of four separate material errors found in the original trial.

Bijan Kian’s criminal case inexplicably is still ongoing due to the DOJ’s appeal of the Trenga’s decision and thanks to an absurd ruling by 4th Circuit (two of the three judges on the panel being Obama appointees) to overrule the motion along with all four reasons cited by Trenga to grant Kian a new trial.

The DOJ is at this moment reviewing Kian’s latest Motion for a New Trial, and is expected to respond in mid-August. Herein lays the problem.

How can DOJ lawyers under the direction of Joe Biden and his political appointees be expected to fairly and dispassionately review the evidence and respond to any defense motion? Joe Biden and/or an immediate member of Biden’s family appears to have personally interfered in the EDVA case against Bijan Kian (either at Joe Biden’s personal direction or not), and the Bidens now more than ever have a vested interest in the outcome of the case.

The answer is they cannot. The Biden DOJ is hopelessly conflicted. This crosses the line from prosecution to persecution. At the very minimum, an indefinite continuance should be granted in Bijan Kian’s trial until a fair and independent review of the prosecution’s case can be conducted, or the case should be dismissed outright on the basis the Biden family’s personal actions have made it impossible for Bijan Kian to receive a fair trial under the current circumstances.