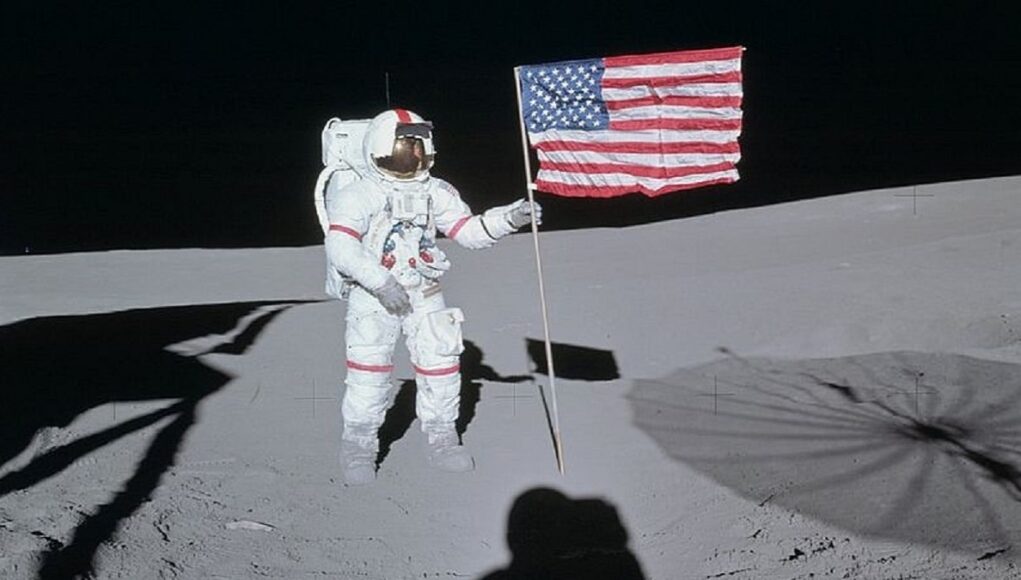 This coming Wednesday will likely pass as most others do, amid the turbulent issues of the current era, with little recollection of former days of real American greatness. And that is extremely sad. Fifty-three years ago, as the world was in the throes of the Vietnam War, and an attempted global domination by the Soviet Union, accompanied by moral collapse and the rise of the leftist counterculture in America, the upheaval took a pause.

Everyone within hearing distance of any news outlet collectively held their breath in a brief but excruciating period of silence that had followed a laconic exchange of technical data, relaying positions, speeds, and the operating condition of equipment that was highly advanced for its time. And then, at 4:53 pm Eastern, a message resounded across the globe “Houston, Tranquility Base here. The Eagle has landed!” And life on this planet would never be the same.

For the first time in history, human beings had landed a spacecraft on another world. Within hours, human footprints would be present on the surface of the Moon, as Apollo 11 Commander Neil Armstrong stepped down the ladder of the Lunar Module and walked on a truly unearthly landscape. The event was the culmination of a national effort spanning the decade of the 1960s, beginning in May of ’61 when President John F. Kennedy challenged the Nation to reach the Moon “before this decade is out.”

Through the turmoil of the era, and despite a major setback in January of 1967 when three Apollo astronauts died in the launchpad fire of Apollo 1, Americans rallied and persevered, which in former days had been their way.

Apollo 11 achieved President Kennedy’s milestone with barely four months to spare. Yet during that remaining four months of the decade, another Apollo mission again succeeded in landing on the Moon and returning safely to Earth. With the December 1972 voyage of Apollo 17, the last Moon mission, a total of twelve Americans had actually visited the lunar surface, six of whom rode in vehicles designed for traversing Earth’s planetary neighbor. In typical American fashion of the day, Kennedy’s goal had not merely been met, it was vastly exceeded.

Of course, the same forces were at work to undermine that great effort which are now wreaking havoc on our Nation. Thankfully, until recent times, the inherent decency and moral certitude of Americans had not been sufficiently eroded to allow such a malignancy to prevail. Still, the era was not without its disinformation and controversy.

The single biggest instigator of discord over America’s Moon program was the Soviet Union. Having launched the first artificial satellite, Sputnik 1, into orbit in October of 1957, and having put a human being into orbit nearly a year before America was able to do so, the Soviets and their media propagandists (many of whom were already infiltrating American “news” organizations) gleefully trumpeted the “superiority” of collectivism for ostensibly advancing the human condition through technology. Yet Kennedy’s challenge, and America’s response to it, proved that a free society could indeed advance further and faster, when given the incentive to do so.

Not willing to simply accept defeat, the Soviets initiated a two-pronged strategy, in hopes of demoralizing the Americans. First, upon realizing that their own efforts to beat us to the Moon were doomed, they attempted several unmanned missions by which they had hoped to land there and return a tiny sample of Moon rock back to Earth ahead of Apollo. At that point they would have claimed victory, with their dutiful minions happily echoing. Here again, their technology was simply not up to the task. So as those hopes faded, they unleashed their backup plan. Sadly, they had much greater success with this one, since it didn’t involve technology, but instead relied on their ability to spread propaganda among a sometimes gullible, sometimes willingly complicit leftist American press.

Suddenly, in the final months before the triumphal mission of Apollo 11, disparaging claims began to be leveled by Americans who not coincidentally happened to be Soviet sympathizers, to the effect that the money allocated to the Space Race was being misused. The narrative was that it could do “more good” if it was passed out in welfare and other social programs here on Earth. And not surprisingly, the “usual suspects” were happy to grandstand on that basis, ultimately carrying the water for the Soviets and other anti-Americans everywhere. By the time of Armstrong and Aldrin’s walk, the leftists had made enough noise to be able to claim the mission, a triumph of American engineering and American resolve, as “controversial.”

Since then, the overwhelming media silence on the event as a victorious milestone in the annals of our Nation has caused many to virtually forget all about it, while sadly allowing others of appallingly deficient scientific background to make absurd claims that it never happened. Like the Nazi Holocaust, those who actually beheld the Moon Program as it transpired are fewer in number with the passage of years. Eventually, not enough people will remain to bear personal witness to it, and if the powers that be want it to be forgotten or swallowed up in conspiracy theories, that will be its fate.

But American Patriots need not allow such a scenario to befall us just yet. Enough remember the struggle, the achievements, the failures, and ultimately the successes to celebrate that great moment for humanity, and for our Nation. On the front leg of that first lunar lander was a plaque which read “HERE MEN FROM THE PLANET EARTH FIRST SET FOOT UPON THE MOON, JULY, 1969 A.D. WE CAME IN PEACE FOR ALL MANKIND.” Americans should shun the critics and the skeptics, and once again fly our flags in commemoration and celebration, this July 20.