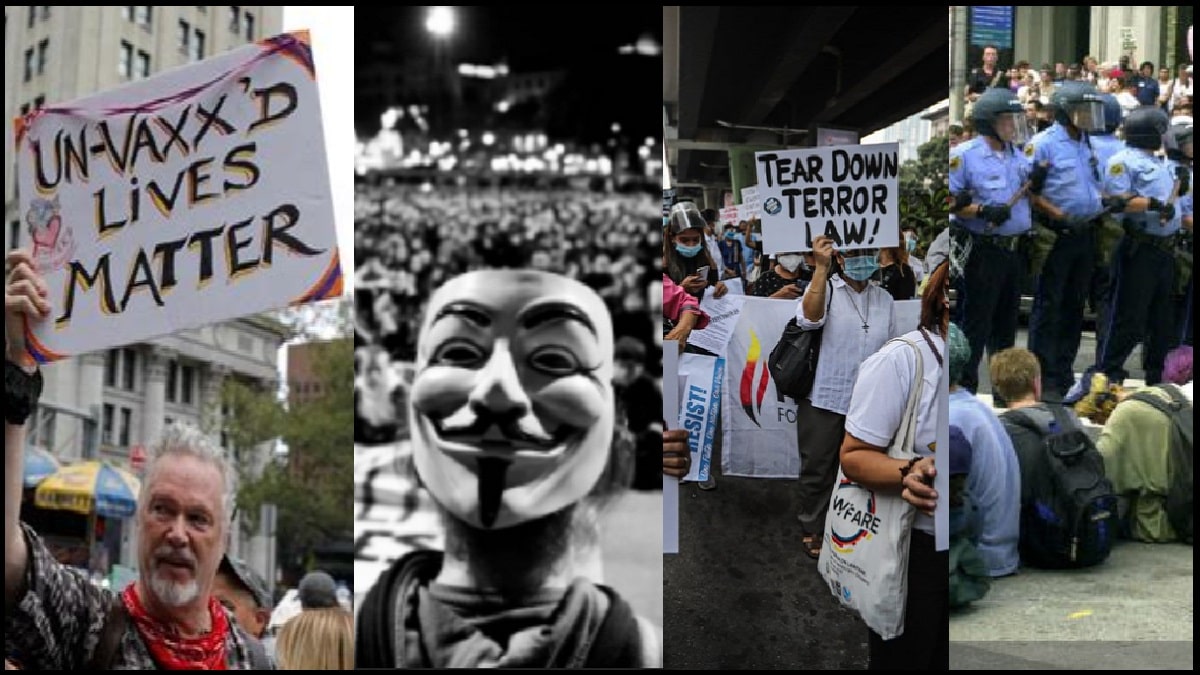 America, if you care about the Country you will pass on to your children and your grandchildren, take note of the events unfolding in Canada, Iran, Northern Europe, China, and Brazil. Take a good hard look that you will not soon forget! The mass protests and upheaval reflect the desperation of citizens to be heard by governments who have no intention of listening. And none of this will change in an amicable, reasonable manner.

Whether the excuse of the moment offered by the leftist/globalist despots is “public health and safety” as is the case in China and Canada, enviro-lunacy (Northern Europe), fealty to a despotic “religious” order (Iran), or more stolen elections to empower the Marxist political machine in Brazil, common citizens are recognizing that their world is being pummeled into madness and tragedy by a callous and indifferent ruling class.

Those in power seek to fortify their positions, in service to their own interests, while the suffering and deprivation of that lowly peasantry (people like you and me) is, at most, an irritation that they would prefer to ignore. And that is how they intend to move forward.

Some common folk naively bought the notion that the “will of the people” would usher in an age of freedom and opportunity. Yet even despite that short-sighted caricature of “democracy,” devoid of worthy moral and spiritual principles to guide it, the ability of corrupt and seditious leftist players to defraud and cheat their way into positions of authority has set a dangerous precedent of sham elections that were once only the realm of backwards tinhorn dictatorships.

Back in another life, America played a central role on the world stage, as a government “of, by, and for the people,” actively bolstering the efforts of those who yearned to breathe free. But that was before our Nation succumbed to the wiles of the leftist counterculture, with its shameless sanctimony presented as the fig leaf over a truly vile ideology and agenda. It was not sufficiently excised when its dangerous nature first became evident. So, like any malignancy it has spread and grown in toxicity.

America in 2022 is no longer the “shining city on a hill.” For several years now, America has been abhorrently playing precisely the opposite role. And the devastation unleashed on innocent peoples throughout the world, who once looked to us as their heroic champions, is beyond words.

Under Barack Obama, freedom fighters in Iran were betrayed, as they sought help from the West to overthrow the illegitimate and repressive regimes of the Islamists. Sadly, Obama’s affections were (and still are) entirely in the camp of militant Islam. Rather than working to free the people of Iran, and neutralize its agenda of state sponsored terrorism throughout the region, he sided with the Islamists and fully supported the murderous, hate-filled government of Mahmoud Ahmadinejad. Immediately upon consolidating his power, Ahmadinejad began rounding up and executing his political opposition.

Last winter, a similar pattern of treachery emerged from the Biden Cabal (likely with Obama pulling the strings here as well). As Canadian truckers courageously rallied against the arbitrary and excessive lockdowns and vax mandates of the Trudeau government, the US began demanding that something be done to suppress the protests on the grounds that American auto manufacturers were feeling the effects. Rather than insisting that this Hemisphere be restored to freedom and justice by lifting the onerous orders, the call came from Washington to simply confront and disperse the truckers. In short, a demand was made for a despotic exercise of power in Ottawa, in order to put down the rebellion.

Similar rumblings are currently being heard from the Biden Cabal in regards to the upheaval in Brazil, where the good citizens of that Nation are refusing to accept the results of their own, obviously stolen election. Massive protests, on a scale never seen previously, are occurring in major cities across South America’s largest country. The chicanery in the days before and after the election was at least as flagrant as it was in America’s 2020 debacle. But unlike Americans, the Brazilian people are not willing to simply accept all of it as their inescapable fate. With cultural and geographical closeness to Venezuela and other nightmarish Marxist cesspools of the region, Brazilians know the stakes of the battle they are in.

A good and legitimate American government would be loudly decrying the corruption and fraud. But of course this administration can do no such thing. Nor is it willing to see freedom and justice restored in Brazil or anywhere else. Such an event could set off an avalanche of freedom fighters throughout the world, rising up to confront the evils and right the wrongs of those who illegitimately hold power. America’s own Democrat Party has massive dirt on its hands in that respect.

It is hardly a coincidence that, as these events around the world reach critical mass, what we heard from the Biden Cabal in the past few days was another effort to create momentum for gun confiscation in America. The single element of the massive protests, whether in Tehran, Beijing, or Brasilia, which could be potentially different if Americans felt compelled to undertake direct action against their government, is that the inherent right of the people to “keep and bear arms” is still upheld and guaranteed by the Second Amendment in the Bill of Rights.

For the despot wannabes in Washington to wield similar brutish power over “We the People,” that long standing “obstacle” must somehow be invalidated. So once again, America was subjected to more grandstanding over the evils of an armed populace. In a November 25 event among the ultra rich liberals of Nantucket Island, Biden stated “The idea we still allow semiautomatic weapons to be purchased is sick. It has no social redeeming value. Zero. None… I’m going to try to get rid of assault weapons.”

So once again, the efforts to outlaw “assault weapons” are couched in leftist sanctimony, as if their agenda has ever had any “social redeeming value.” And once again, the real effort is to hamstring Americans from defending themselves against despotic over-reaches from an out of control government.

While it is inspiring to see how willing the people of Brazil, China, and elsewhere are to rally and fight for their innate rights and freedoms, it is also sobering to realize just how much of an uphill battle they face, owing to their totally disarmed and defenseless condition. Americans have their own major battle against just such evil forces. Ceding our inherent and unalienable rights to the leftist power mongers in government would only make that effort much more difficult, if not totally impossible.