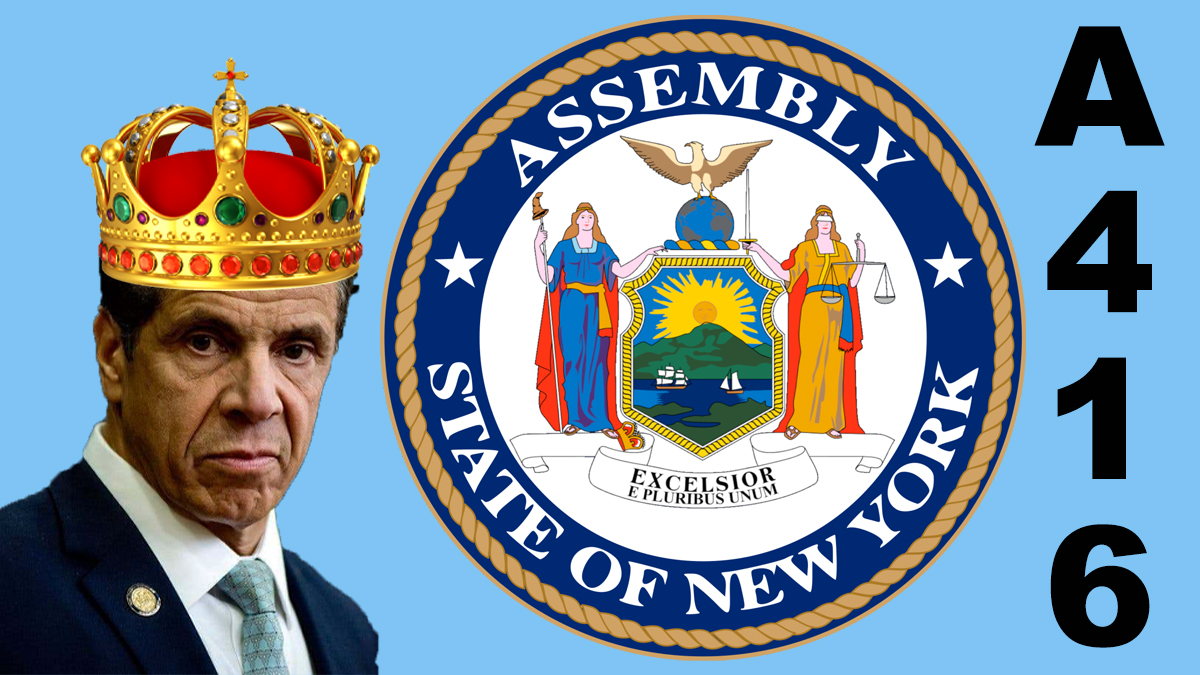 A bill currently on the docket in the New York State Assembly Health Committee could give Governor Cuomo the ability to ‘detain’ anyone government officials deems a threat to public health. Bill A416 gives the NY government or any local jurisdiction the ability to detain you without recourse.

[Bill A416] Relates to the removal of cases, contacts and carriers of communicable diseases who are potentially dangerous to the public health.

The provisions of this section shall be utilized in the event that the Governor declares a state of emergency due to an epidemic of any communicable disease.

Upon determining by clear and convincing evidence that the health of others is or may be endangered by a case, contact or carrier, or suspected case, contact or carrier of a contagious disease that, in the opinion of the Governor, after consultation with the Commissioner, may pose an imminent and significant threat to the public health resulting in severe morbidity or high mortality, the Governor or his or her delegee, including, but not limited to the commissioner or the heads of local health departments may order the removal and/or detention of such a person or of a group of such persons by issuing a single order, identifying such persons either by name or by a reasonably specific description of individuals or group being detained, such person or group of persons shall be detained in a medical facility or other appropriate facility or premises designated by the Governor or his or her delegee,

If you are detained, you may request release after three business days excluding weekends and holidays. After this time, the Governor or official tasked with overseeing your detention must make an application for a court order authorizing the detention. This application will include a request for an “expedited” hearing.

After any such request for release, detention shall not continue for more than five business days in the absence of a court order authorizing detention.

Not withstanding the foregoing provisions, in no event shall any person be detained for more than sixty days without a court order authorizing such detention.

This appears to be an unconstitutional ‘arrest’ and your behavior during your incarceration is taken into account. Legal Counsel will be appointed to you however, you must request this. When you would be entitled to any councel is not clear. Can you contact your lawyer immediately upon being detained?

You are allowed to give the authorities’ addresses or telephone numbers so your contacts may be notified of your detention. In other words, you will not be able to take a computer or phone with you when they take you away.

The required time for quarantine of Covid-19 has traditionally been two weeks, recently shortened to 10 days. However, if you test positive consistently, you will be held as long as necessary. With the rampant false positives the tests provide, you could be held indefinitely.

This Bill deals with any and all potentially communicable diseases. Will people be taken away when they have the common cold or a case of the flu?

If you are Covid-19 positive, but asymptomatic, you will be taken even though no scientific evidence exists that asymptomatic persons can spread the disease.

What about your children. If you’re a single mother with three young children, and you test positive but the children don’t, does the State take your children away from you?

New York is the start…. if this passes, it will start a chain reaction to other states.
Our rights are disappearing faster than ice on a hot summers day. These are frightening times… the United States of America must be taken back from the Global Communist Forces that are attacking from outside and from within before it is too late.

That time is fast approaching.