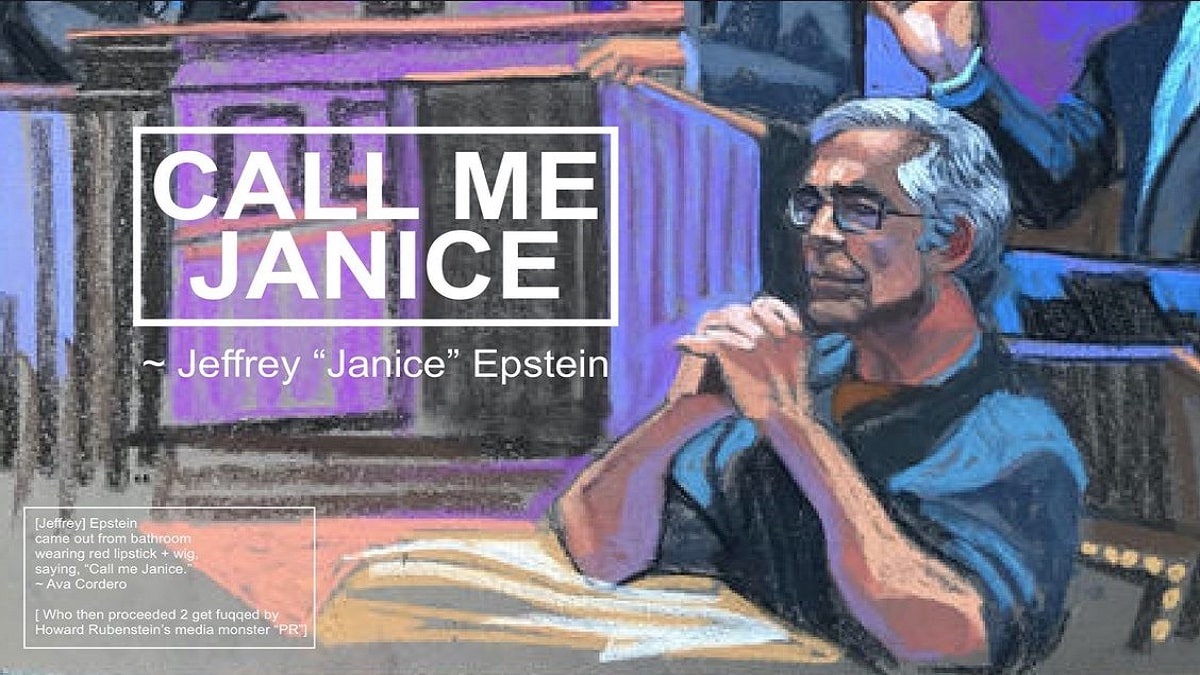 An Excerpt from the Epstein Project Newsletter by Kirby Sommers. Reprinted with permission from the author.

Jeffrey Epstein owned the most magnificent and largest mansion in all of New York. A seven-story home featured in Architectural Digest purchased by his mentor, Leslie Wexner, CEO of Victoria’s Secret. Epstein had other homes as well. A Palm Beach mansion. A sprawling estate in New Mexico. An extraordinary apartment in Paris. A private island off the Virgin Islands named Little St James, and after his death it was learned he’d purchased a second island known as Great St James.

Epstein’s secrets were many.

Among these: How does a man who drove a New York City taxi cab for “pocket money” become the most powerful child trafficker and extortionist we’ve encountered in our collective memory?

It wasn’t just that Epstein wasn’t the billionaire he pretended to be, nor that he wasn’t the philanthropist mainstream media made him out to be; and frankly, it wasn’t even that Epstein was later outed as a pedophile. What’s troubling is that even after Epstein was declared by Alexander Acosta to be an “intelligence asset” NO reporters and NO law enforcement agencies are making ANY reasonable connections to Leslie Wexner, Leon Black and Glenn Dubin.

In today’s ‘Epstein Project’ I examine an unknown piece of the Epstein puzzle.

Maximillio Cordero was born on November 15, 1983. Ever since he could remember he strongly identified as a girl. At 12 he began to dress like a girl and began to live as a female since her early teens.

She had cosmetic work and hormone treatments to help her look more like a woman. She even learned how to apply makeup perfectly. The reflection in the mirror was stunning. Ava was far more beautiful than many of the other girls she’d seen on magazine covers.

But what she wanted the most was to be the real thing. To have a sex change operation. However, for that she would need $10,000. And, so she began to save money in order to have the procedure.

In the Spring of 2000, while attending the Fashion Institute of Technology (FIT) on a part-time basis, she was approached by a woman in her 40s. Her new acquaintance confided that she had a “super wealthy” male friend who could help her “develop a modeling career”.

“He has a thing for massages and he pays well. You should meet him,” the older woman urged. She then handed Ava a slip of paper with Jeffrey Epstein’s Upper East Side address.

Ava agreed. After all, it seemed like the chance of a lifetime. A way to make all her dreams come true.

Ava Cordero stood in front of the majestic 51,000 square foot mansion on East 71st Street with the oversized 16-foot oak doors and rang the bell. She could hardly believe it. The whole thing seemed like a fairy tale.

Clad only in a bathrobe and slippers Jeffrey Epstein, 47, greeted her. He had graying hair and a thick Brooklyn accent. The house was awe inspiring. Ava had never seen anything like it.

Epstein took her on a tour of his palatial home. When they stopped at his office he pointed to the taxidermied poodle and then to the statue of dog feces next to it.

Ava giggled and he let out a hee-haw laugh. It was like he was a kid all over again. He always got a rise out of shocking people.

Epstein then bragged to the 16-year-old that he was the money manager for billionaire Leslie Wexner.

“My friend Les Wexner owns Victoria’s Secret and I can get him to let you be one of the models in his catalog,” he paused and waited for the desired effect. The glean of hope in her young and eager eyes and then added, “That is, If you’re nice to me.”

Ava could not believe her luck and tried to let his words sink in.

“I’m 16 years old,” she replied. “All I want to do is become a model,” she was becoming increasingly uneasy.

Epstein suddenly slipped out of the robe. He was naked. Before Ava knew what was happening or what to do he managed to grab her head and forcefully pushed her down toward his penis demanding oral sex.

“Be nice to me,” he repeated again while shoving his manhood inside her mouth. “You know what you have to do.”

“If you want me to help you then you have to help me,” his words were like daggers. He sounded like a mobster and not at all like the billionaire she was told she’d meet.

Once he got Ava to comply, he grabbed her penis hard. She screamed. He then softened his touch and began to stroke it. To lick it. To kiss it. To suck it.

When it was over, after she had had been raped, as she was trying to pull herself together, she heard him say breezily, “Come back sometime. Bring your 14-, 15- and 16-year-old girlfriends. I love girls your age.”

He acted as if nothing had happened. Even though her entire life had just been shattered.

After the shock was over, she fell into a pattern of seeing him. What else could she lose? At one point, Epstein felt so comfortable with her that he invited her to accompany him to Thailand.

“You can help me pick up other girls your age.”

The details of Jeffrey Epstein’s sexual encounters with Ava Cordero come from a lawsuit she filed against Jeffrey Epstein and Leslie Wexner on October 16, 2007. This happened before the onslaught of lawsuits that followed in Palm Beach, Florida. Ava Cordero had the same story that would later be repeated by an endless stream of teenagers. All of it was the same. Even Epstein’s request that she recruit other “girls her age” for him to sexually abuse.

A fascinating account of Jeffrey Epstein in drag is found in this rarely discussed case.

As she had done many times before Ava trekked to the East 71st Street mansion. She was led upstairs to the “massage room” where she knew Epstein would be waiting. After their greeting he suddenly disappeared into the bathroom. When he came out several minutes later he was wearing a matted red wig and had applied bright red lipstick across his lips.

“Call me Janice!” he ordered.

Once the two were a tangled web of arms and legs he began fondling and licking the penis of the still biological minor boy.

When it was over Jeffrey Epstein cooed, “You have a tight butt like a baby.”

The lawsuit shows there was a lot of role playing. Including sadomasochistic sex. Another episode describes Ava on all fours playing the part of a dog.

She told Epstein “I’m old yella,” and began barking. She was wearing Victoria’s Secret lingerie and barked away at the top of her lungs.

“Be careful,” she warned him in full character, “or I’ll bite you.”

There are several important threads in the Ava Cordero story. The first is obvious. She was a biological boy. For years rumors circulated about Jeffrey Epstein and Leslie Wexner having had a homosexual relationship. It seems this might lend credence to that. Further, during the time Maria Farmer was at Wexner’s guest house in Ohio, one of the maids allegedly told her that Wexner “entertained young boys.”

The second takeaway is that in Ava Cordero’s lawsuit against Jeffrey Epstein she also sued Leslie Wexner. Wexner was still the legal owner of the mansion on East 71st Street and as such the lawsuit held him responsible for the “emotional and mental injuries” that Epstein’s conduct caused.

New York real property law states that a property owner has a responsibility when someone gets injured on their property. This extends to guests and places the onus on landlords to keep them free from preventable harm.

There is a third thread I explain further ahead which casts doubt on Leslie Wexner’s statement that he “ended” his association with Jeffrey Epstein. You’ll see why.

Of course, the mainstream media friends of Jeffrey Epstein and Leslie Wexner trashed Ava Cordero in the press. Among them Mort Zukerman, then owner of the Daily News and Rupert Murdock owner of the New York Post. They labeled teenage Ava an “extortionist” who went after the “Billionaire Massage Hobbyist.” Frankly, I don’t know anyone labeled a “massage hobbyist” who isn’t paying for illicit sex. A “John”, if you will.

When Jeffrey Epstein was arrested on July 6, 2019 Leslie Wexner made a public statement meant to distance himself from the whole sordid affair. He claimed in July of 2019 that he had severed ties with Epstein “almost 12 years” earlier. Which would have correlated with the lawsuit against them both by Ava Cordero.

What should be noted is that it wasn’t until 2011 that the deed to the Upper East Side mansion located at 9 East 71st Street in New York City was transferred from a Wexner owned entity owned to an Epstein owned entity in the Virgin Islands. This seems to imply there was some communication [between] the two men. And it certainly puts into question Wexner’s “almost 12-year” claim.

But, wait. There’s more. In 2017 Cordero was arrested at a Victoria’s Secret store.

The article states “A passing NYPD patrol found the unsecured door and spotted Cordero inside, stocking up on $1,000 worth of push-up bras, g-strings, thongs and makeup.” It then adds, “Cops took her into custody without incident, charging her with burglary, grand larceny and criminal possession of stolen property.”

I will say this: I have lived in New York City most of my life. I was born here. I even had a couple of stores in Manhattan. And, at no time did a police officer ever go out of his or her way to either one of my two stores to arrest a burglar. Not even when we were being held up by a gunman and screaming.

Additionally, all the Victoria’s Secret stores had alarm systems. In fact, every store had an alarm system. Had Cordero, in fact broken into the store, the ear shattering alarm would have frightened her away.

The other important thing to understand is that in New York there is a $1,000 threshold for a theft to be considered “Grand Larceny”. I find it incredibly strange that the total amount of what Cordero “stole” was not $805 or even $999 – but a flat $1,000. Just the right amount to send her to jail.

Furthermore, according to Epstein’s flight logs, on the day Cordero was arrested, he was on his Gulfstream from Arizona to New Mexico. Seems like perfect timing to me.

In all honesty, I believe Ava Cordero was set up. There are just too many unusual events to think otherwise. What I know about this group of men is: they never let you go. You are always watched and presto when you least expect it, they extract their revenge.

In closing, how does a Brooklyn born cab driver become one of the most powerful men in the world? The answer is easy: he becomes a spy, of course.