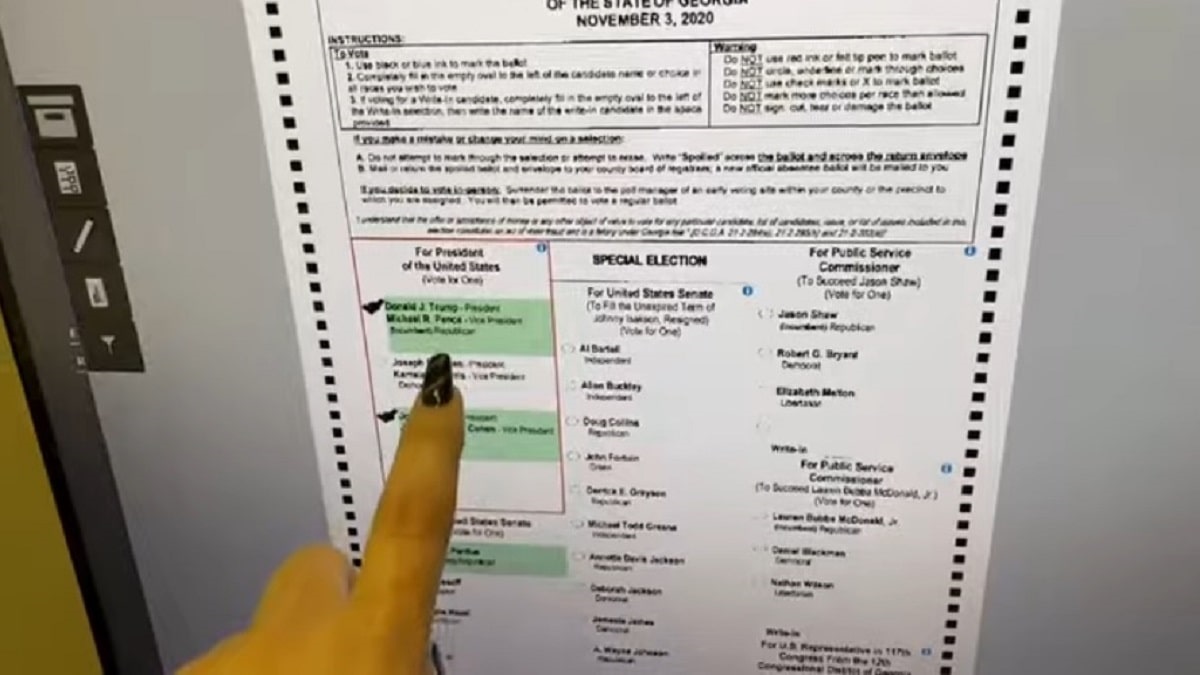 A recent video from Coffee County, Georgia demonstrating the ballot adjudication process using a Dominion system has surfaced, in which an ‘election supervisor’ shows the process of adjudicating problem ballots. Adjudication is the process of making a decision about the intent of a voter when the intent is not clear. In the voting process that could be on a ballot that has been “overvoted”, as when two names are marked in a race requiring the voter to choose only one candidate, or where a ballot was marked in an unusual way, such as a checkmark instead of filling in a bubble.

The video demonstrates how simple it is for the supervisor to make choices on behalf of the voter. The examples in the video include deciding which candidate to choose when there was an overvote, choosing a candidate when the voter had not made a choice, and changing the voter’s choice entirely.

Shockingly, the ‘election supervisor’ is able to do all of the above. She is also able to scan the same stack of ballots over and over again. The adjudication system does not recognize that the ballots have already been processed, lending credence to the numerous sworn witness testimonies to this that have been filed by Trump’s legal team.

Here, the official is marking up the ballots with overvotes to demonstrate how adjudication works.

The ballots are then straightened and reinserted into the tabulator.

Once the ballots are scanned, the batch is reviewed for errors. Note that all ballots have been accepted after having been run through the tabulator a second time. This time however, the tabulator screen signals the supervisor that the batch is ‘pending adjudication’, indicating some problem with ballots in the batch.

The supervisor pulls up the batch to be adjudicated. Next, she brings up the image of a problematic ballot. She notes the defect in the ballot is an overvote.

The ballot shows two presidential candidates selected and a checkmark instead of a bubble filled out for the next race. A red box appears around the problem areas. She demonstrates several options for remedies to the defects.

First, she can accept the ballot as is with the red boxes highlighted. Optionally, she can remove the red box and accept. She stated that it would not be possible to know how the system handled either choice.

Next, she showed that she could choose a candidate whose race had been left blank. She hovered her cursor over the box next to a candidate’s name and added a checkmark. Then she accepted the ballot as complete. The supervisor was able to successfully pick a candidate of her own choosing.

Using a new overvoted ballot, the supervisor demonstrated that she could make a decision even in the presidential race, which had been overvoted in this example. She clicked the mouse over Joe Biden’s name, even though Donald Trump was also selected. She also removed a vote for a down-ballot candidate and accepted the change.

The final demonstration showed that the election supervisor could erase all votes on a ballot completely and accepted it as complete. As we can see, it takes a very honest election supervisor to due the bidding of the people, make intelligent and honest choices.

Adjudication likely occurred in every precinct in the country. Fulton County, Georgia adjudicated around 106,000 ballots, meaning that the election supervisor in that county was the one tasked with making choices on those ballots. We have all seen the footage from State Farm Arena’s after-hours counting escapades of Ruby Freeman and her daughter Shaye Moss. We’ve also seen their bias towards one candidate via social media. Moss was the supervisor that night. Was she fair and impartial in adjudicating problem ballots? Were ballots run through multiple times as it appears on the CCTV video?

This also calls into question the partisan money, like that from Mark Zuckerberg, who provided grants to assist in paying poll workers. They were predominantly from a single party. Were they fair and unbiased in their poll work?

Clearly, there is too much room for voter fraud in the Dominion voting system.